In the Face of Scandals Including Benghazi and IRS, Barack Obama Following Squirrel on Twitter

A US ambassador in Libya was bloodily murdered on September 11, 2012. In the immediate aftermath, the Obama Administration knowingly put forward erroneous talking points and intelligence, likely in the hopes that their mishandling of terrorism would not hurt the President's reelection campaign.

The IRS, starting as early as 2010, scrutinized and targeted Tea Party groups. The Administration dismissed these claims for three years; yet, as the Tea Party has been vindicated, President Obama is scrambling to save face, saying that only lower-level employees knew about this partisanship.

Today, it was also revealed that the Obama Administration is secretly wiretapping news agencies, most notably the Associated Press. Thus far President Obama has refused to explain why he is trying to infringe upon the freedom of the press and freedom of speech.

It is in this atmosphere that President Obama has found the time to follow a squirrel on twitter. Specifically, he is following the profile "@common_squirrel;" its profile description reads, "run run run run:" 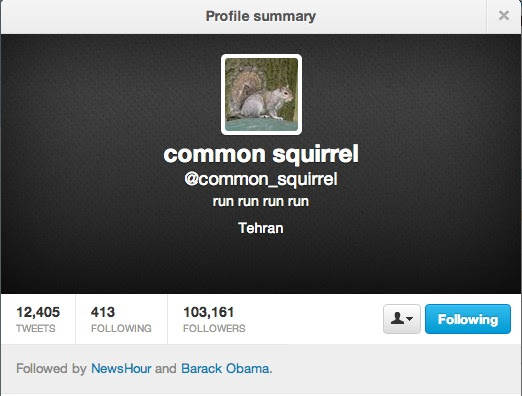 In an age of growing scandal, President Obama must find himself reading such tweets as this one from "common squirrel:"

Thank goodness that the President doesn't have any greater responsibility than to read 140-character statements from a bushy-tailed mammal.
Posted by Aurelius