Canada and the United States foiled an attempted attack by al Qaeda today, arresting Chiheb Esseghaier and Raed Jaser. Among other things, Esseghaier, it has been learned, was a PhD student at INRS University in Quebec.

On Esseghaier's Linkedin profile, he posted this picture as his profile:

This is the same image that al Qaeda uses on their flags: 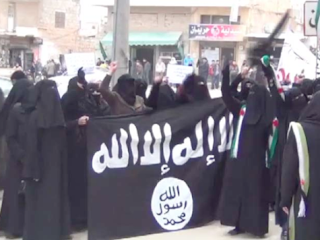 His profile lists various colleges that he has attended, including INRS, Université de Sherbrooke, and IPEST in Tunis. Esseghaier states that he is able to speak Arabic, French, and English.

Esseghaier explains in a short biography he wrote on a personal website:


Born in Tunis, Tunisia. I got Engineer degree in Industrial Biology from Institut National des Sciences Appliquées et de Technologie (INSAT), Tunis in 2007. After that, I continue master studies at the same institute in Industrial Biotechnology field and i got the MSc degree in 2008. Then, i moved to Sherbrooke University to work on research project on SPR biosensor and gallium arsenide semi-conductor biofunctionnalization. In November 2010, I joined BBBL lab in Institut National de la Recherche Scientifique (INRS) to start PhD program in developing optical and electrochemical biosensors.

He has also been published several times:

The image that Esseghaier used on his Linkedin profile is popular on Islamic fundamentalist websites, such as Islamic Awakening.

This picture was included on Chiheb Esseghaier's personal website:
Update: The Huffington Post is reporting the same information.
Posted by Aurelius