We've covered the Obama's campaign problems with math before. A few months ago they stated that 12 times 40 equaled 1,000. Today, they're publishing nonsensical statistics about the money Obama raised during the month of May. Before we begin, please enjoy the jumbled mess that President Obama himself posted online: 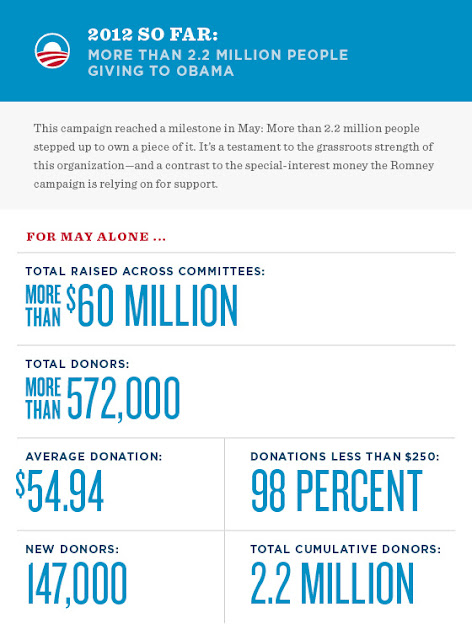 So the basic facts that the Obama campaign purports to be true are that they raised sixty million dollars from either 572,000 donors or 2,200,000 donors. I am not certain what the different between "Total Donors" and "Total Cumulative Donors" is (which defeats the purpose of the word "total"), but I assume that "Total Donors" means for May and "Total Cumulative Donors" means since he began fundraising for reelection in January of 2009.

Importantly, Obama touts the average donation as being exactly $54.94 in order to pretend that he is backed almost exclusively by average Americans. Unfortunately for him, even the average American has a calculator handy. So let's see if Obama's math holds up.

Now, since I wasn't certain if they used the "Total Donors" or "Total Cumulative Donors" to figure out the $54.94, I'm going to assume Total Donors first. And obviously, the way to get an average donation would be dividing the total monetary number by the total number of donors. To quote the dictionary (for arithmetic mean), "The value obtained by dividing the sum of a set of quantities by the number of quantities in the set. For example, if there are three test scores 70, 83, and 90, the arithmetic mean of the scores is their sum (243) divided by the number of scores (3), or 81."

...And these are the people handling our economy.