One month ago, one of the biggest stories was the Occupy Wall Street movement. But that was one month ago. From violence and murder to rapes and disease, OWS has been shown as the blight that it truly is. And because of it, despite the shrieking from the Main Stream Media, Americans have rejected Occupy Wall Street and its socialistic values.

This is no more evident than OccupyWallStreet.org's website, which was created by the founders of the protests just before the "movement" went national. Their readership peaked in early October and has plummeted since. As the Web Information Company Alexa reports, OccupyWallStreet.org was one of the internet's 2,500 biggest sites just two months ago.

And yet, as they lose tens of thousands of hits, their ranking continues to fall. For the last month, the site was ranked only as the 6,613th biggest on the internet. But it gets much worse for OWS. That rank is only an average, including early in the month when the site was still peaking.

In fact, for the last week, their site is only the 14,149 biggest, and yesterday alone it was the 17,412th biggest. In comparison, the conservative site Free Republic was ranked as the 4,157th biggest site on the internet yesterday, and was the 4,372th biggest one month ago. This shows that the conservative site has held steady, or is growing. OccupyWallStreet.org, on the otherhand, it sinking like a stone: 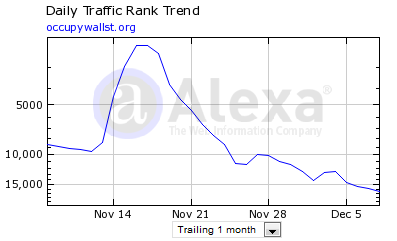 The Occupy Wall Street-related site Ad Busters shares the same fate as their brethren.  Adbusters.org, like OccupyWallStreet.org, peaked in early October.  But they have plummeted since. 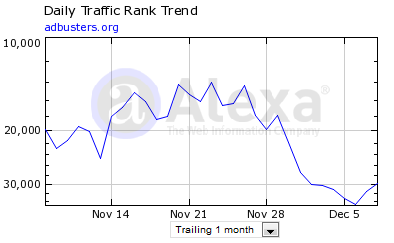 More than just the loss of coverage from the Main Stream Media, the loss of readership shows that OWS is fizzling.  The average person doesn't visit these sites anymore.  Interest is gone.  The supposed police brutality that "shocked the nation," as Time Magazine lied, was less than a blip on the radar for readership.

Unless OWS does something drastic, their movement is dead.

Note: Obviously all data was researched when I wrote this article and may change in the future.