Well, as if those on Occupy Wall Street didn't have enough hyperbole. Now, the group that has applauded an assassination attempt on the President and called for cannibalism is resorting to their same-old same-old. This fits well with their expanding rap sheet.

OWS id declaring the New York City Police Department's clearing of Zuccotti Park various things, including the most insensitive terms they could possibly think of. In short: cleaning the park = the Holocaust.

Don't believe me? Well, let's take a look at Twitter:

Or maybe this one blaming... wait for it... the corporations!

Or the narcissists comparing their struggling with the slaughter of civilians going on in Syria against a brutal dictatorship:

These people are impossibly stupid: 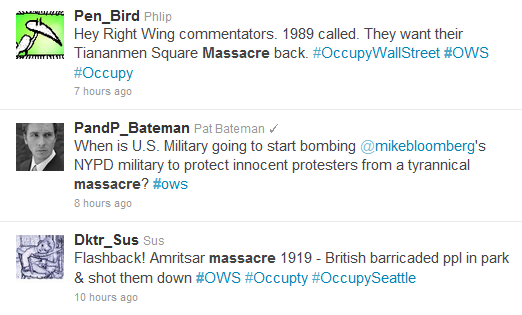 These people are clueless. Are they supposed to be the future?

Update- Here are a couple of idiotic comparisons of Occupy Wall Street to the murder of six million Jews: