Today marks just another round of profound hypocrisy from those on the left. From 2003 on the national media was transfixed on the case of an undercover CIA agent being 'outed' by a vengeful Bush Administration when it was supposedly caught in a lie. Columns railed against the 'abuse of power' by the White House and some foamed that it was comparable to Watergate. Calls came for Vice President Cheney's resignation and for the imprisonment of members of the Bush Administration.

Instead, it was learned that Valerie Plame was open about her CIA status and willfully sent her husband to Niger to explore claims of Iraq seeking African uranium in violation of federal nepotism laws. Her husband, Charles Wilson, did not actually do what he was tasked to do and British intelligence still pointed to Saddam Hussein's government attempting to buy yellowcake uranium from West Africa.

However, if you have gone to the theater lately you may have noticed a dramatization called Fair Game that lionizes Plame and Wilson into heroes. And Sean Penn is playing Wilson to boot.

Of course, if you go anywhere in the internet you can find recriminations about the Bush Administration to see how it 'lied us into war.' One example in an interview with Mrs. Plame:

Furthermore, the Left was all too happy to claim that those who opposed the Bush Administration efforts in Iraq were 'traitors' and that Plame's life was put in danger through the 'outing.'

Now if this is accurate, Plame was in danger from a senseless and unprovoked leak in order to further suspect political motives.

Furthermore, an editorial for the Denver Post effectively equates Plame's identity being put in the open with treason-- aiding and abetting America's enemies by giving them sensitive information.

Fast-forward to 2010. The Wikileaks 'outings' of classified information covers all different fields. Not only does it out information from the military including about undercover or in danger personnel, it is now divulging state secrets on a massive level.

Of course, you would expect the people on the Left to be intellectually honest and immediately denounce Wikileaks' nihilist maneuvers.

Of course, this has to be different on the Daily Kos: 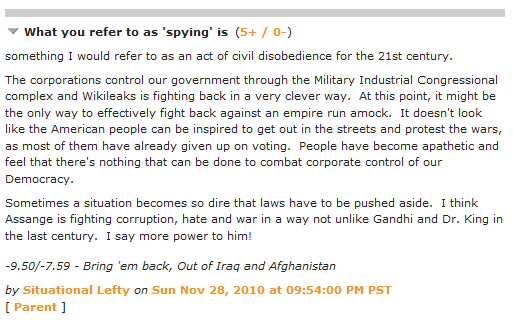 It couldn't possibly be immoral to release classified information, after all, it's civil disobedience!

Or in the Pittsburgh Post-Gazette:

Hypocrisy can be shown in many ways. However, the examples put forth here and thousands of others presenting themselves on website front pages and newspaper editorial sheets all express the same smug outrage. Plame is a hero for being a liar, and Wikileaks is great for undermining American fights against dictators and religious fundamentalists. Say hello to Leftism in the 21st century.