If conventional wisdom is to be belived, Hillary Clinton will win the Democratic nomination walking away. However, certain key factors have not been properly vetted, especially in the crucial early contest in New Hampshire. Deeper analysis seems to show Vermont Senator Bernie Sanders with particular advantages.

New Hampshire is a bit different than Iowa, with a larger number of younger voters and the ability for independents to vote in their primary. The state should also allow for Sanders' homefield advantage to come into play. Many New Hampshire residents watch news from Vermont and are already familiar with the Senator.

Part of this was discussed in a study conducted by the University of New Hampshire. There has been a rapid growth of residents moving from Massachusetts, which swings the state farther to the right than in the past. There is also a rebellious streak in the voters, allowing John McCain to win the primary there twice.

There has been a sharp reversal of demographic trends, with younger voters now making up a larger share of the population than in the preceding decade.


There is also significant data from the RealClearPolitics poll of polls, which shows Sanders holding a steady lead. 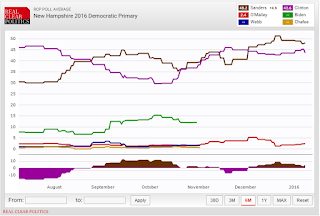