Cynthia McKinney: The Government is Using Vaccines to Give Black Kids Autism

In an interview discovered by Pundit Press, former Congresswoman Cynthia McKinney contended that vaccines give children autism. Not only that, but she believes that it is knowingly being given to black children by the government despite the fact, she says, that they are more susceptible to getting it. "It’s reminiscent of eugenics," she explained.

During the interview with San Francisco Bay View, which has an audio recording of the conversation on their website, McKinney claims to have found a conspiracy in which the CDC knowingly hushed data that shows that black children get autism from vaccines.

Citing a "whistleblower," Ms. McKinney explained, "The omitted data suggested," she said, "that African American males who received the MMR (that’s mumps, measles and rubella) vaccine before age 36 months were at increased risk for autism. Now, the risk was like 300 percent, I mean it was like, as he said “statistically significant.” It was huge. And basically what they did was they left that information out."

She continued, "the bottom line is this whistleblower by the name of William W. Thompson has acquired a lawyer, and on that lawyer’s website he’s posted information saying that he and the other authors of the study – there were three authors of the study – intentionally suppressed information that was statistically significant demonstrating a relationship between early administration of the MMR vaccine and Black boys – Black babies."

McKinney's "discovery" is extremely important, according to her, "because we’re talking about young children being affected for the rest of their lives because of a [vaccine] lie that was told by the CDC. Now, that’s one method. On the other level is that incidents of autism have exploded." 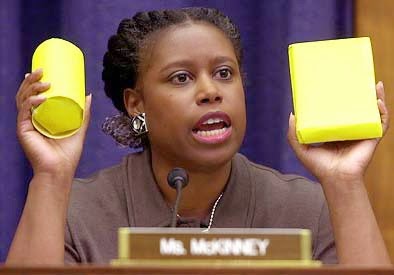 White people aren't nearly as effected by what she's discovered, Ms. McKinney adds, and vaccines and autism is reminiscent of controlled breeding.

"So this is something new that our community is having to cope with," she said, "and it’s reminiscent of eugenics because they knew that whatever the formula was that they were using was going to have an adverse effect on Black babies – Black male babies in particular is what they studied. But there was this adverse reaction, and they did nothing; they remained silent. It’s outrageous."

She asserts, "This is a crime. And of course, because the city of Atlanta is predominately Black, then if the CDC wants to study Black people, they have a population right here. And of course you also know that with the prison situation – there’s a preponderance of Blacks in prison – and these kinds of studies, and we don’t know what they’re doing and why are they collecting Black DNA, which is another discussion that I had on my Facebook page."

Somehow vaccines and autism relates to prisons taking your DNA if you're arrested, she continues: "Anytime you’re arrested now – it used to be upon conviction they would get your DNA, but now it’s upon arrest they get your DNA. You know I ask people, I say, “OK, you better stop this; this is being done for a reason. It’s going to come into the larger community, it’s going to come into your neighborhood if you don’t stop it from happening to Black people.”"

McKinney says she doesn't understand why the Obama Administration and the Congressional Black Caucus are silent on the issue.

In case you're wondering, Snopes reviewed the claim and labelled it irrefutably false.
Posted by Aurelius