On Sunday, May 17, the mascot of the St. Louis Cardinals held a sign that read "Police Lives Matter." The person in the mascot outfit said he did not know what was on the sign.

For this action, Fredbird has been labelled a "racist." Again, this is a baseball mascot holding a sign saying that police lives matter.

The website Deadspin learned of the picture below and ran a story titled, "Your Racist Uncle Will Love This Picture Of The Cardinals' Mascot:" 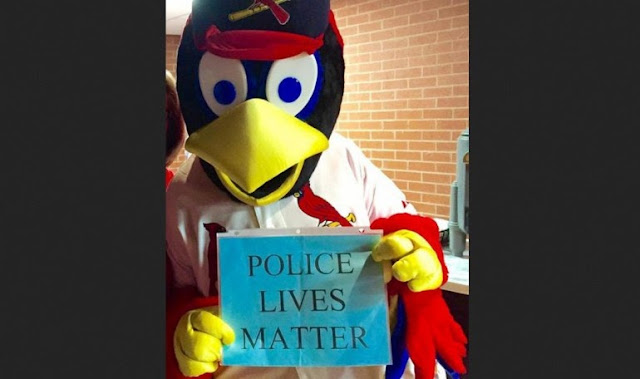 The author of the article, Tom Ley, then rambles for several paragraphs in an expletive-filled tirade. For example:


(Here’s where some of you are going to say, “What, police lives don’t matter?” To which all we can say is, “Cut the shit.” Of course police lives matter, but used as a direct retort to the non-controversial idea that black lives matter, the phrase is an at best crypto-racist way of dismissing legitimate anger about police violence in black communities.)

Ley also writes that Fredbird held the sign at an event away from the stadium the Cardinals play in. That's wrong, but he hasn't corrected his mistake in the original article.

Separately, the Cardinals have stated that Fredbird did not know what was on the sign, saying he was approached by fans, who asked him to hold a sign, and he did so.

The image was then posted to the St. Louis Police Officers Association Facebook's page. When the Cardinals heard about the controversy, they contacted the page and asked them to remove the image, which they did.
Posted by Aurelius