According to a new international survey conducted by the British Broadcasting Company: 59% of the 26,000+ individuals surveyed hold a mostly positive view of Germany - making the industrial giant most popular among all the nations in the world. 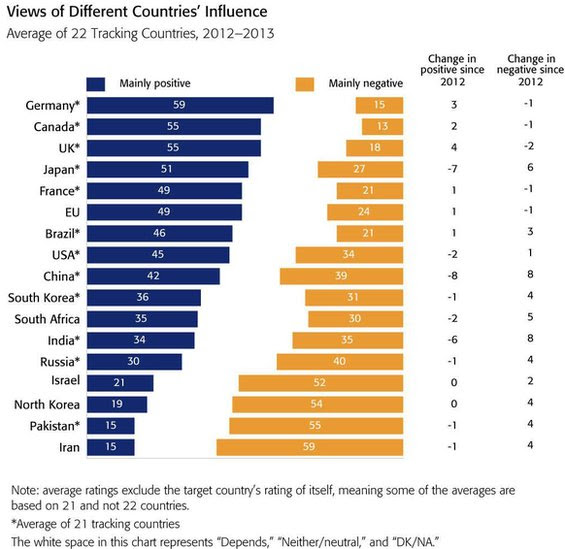 Germany topped Canada, the United Kingdom, Japan and France for most popular; while Iran, Pakistan and North Korea inhabited the unpopular section. Brazil, America and China occupied the middle ground with 42-46% averages.

One would assume the Germans popularity came from bailing out a fifth of the European Union during the global economic recession, but the poll found interestingly high negatives from rescued nations, due to anti-austerity measures required by Chancellor Merkel and her EU partners in exchange for much needed funds.

Then again maybe everyone just loves the autobahn...

Regardless, the Germans are also viewed as the most arrogant and uncaring of European nations, which I'm sure they really don't give two shits about. Hell, they started two catastrophic wars in the twentieth century... both of which they lost miserably... and who is the strongest and most powerful nation in continental Europe today? Oh, Germany.

Side note: How exactly is Russia viewed more positively than Israel? Russia is funding al-Assad's political genocide within Syria while Israel targets and destroys jihadists attempting to drown the world in blood. I would also like to point out Israel has political and media freedoms while Moscow imprisons their opposition....
Posted by Editor