One of the first, and one of the most disgusting events that occured after the January shooting of Congresswoman Gabrielle Giffords, was that many in the press and the internet blamed Sarah Palin and the Tea Party for the shooting. Not even 24 hours has passed since the tragic events in Norway, and people on the net are already pushing the link between suspect Anders Breivik and Sarah Palin.

We look at FireDogLake, which after quoting a paragraph from conspiracy site WhatReallyHappened, has this little nugget for us:

At Democratic Underground, we have the full force of blaming the Tea Party and the right in general. There we get a two-for-one as they attack both Palin and Free Republic.

After two tragic killings in which over 90 people are massacred, is it appropriate to make a joke about the attractiveness of the attacker? And tie him to non-violent politicians? On the Huffington Post it is with this great comment. 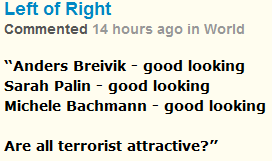 And the stupids are out on Twitter, as well. Here they push the Breivik/Palin link through analogy:

Or claim he carries a picture of her:

I suspect that there will be a big meme in popular culture about how Breivik was tied to the Tea Party. As a matter of fact, it's in full force now-- take a look on Twitter. So this is Jared Laughner 2.0. Another one blamed on Palin and the Tea Party by those who said we should not assume.

More has been published on the shooter. He could be the one pictured in the photo of the possible shooter.

There are photos published of the island here and here.