On the Ground Coverage: Christie Declares Guantanamo Will Stay Open

At an event at a middle school in Bedford, New Hampshire, Chris Christie appeared to be gaining momentum. The New Jersey governor's crowd was packed with about 400 spectators. He was joined by Maine Governor Paul LePage for a town hall style meeting. 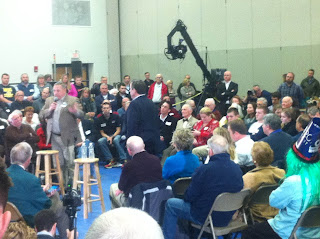 Christie was blunt about many answers, speaking about his role as a US Attorney for New Jersey. Christie also was asked about what he would do with Guantanamo Bay. He said that he would keep the facility open and not allow a single suspected terrorist out. He said it would be reckless for a President to consider doing so.
Posted by Editor