Hope over to CNN if you want to, and you get click on a myriad of links purporting to tell you all about the news. From videos to articles to opinion pieces, the Cable News Network tries to pass itself off as a reputable news source.

Click on TV & Video, however, and you may find some odd things linked together. In particular, under the "GOVERNMENT SHUTDOWN" section.

There, you see some things that you might expect: reports on the government negotiating (or not negotiating), specific politicians' beliefs, and... the DC car chase from last week? 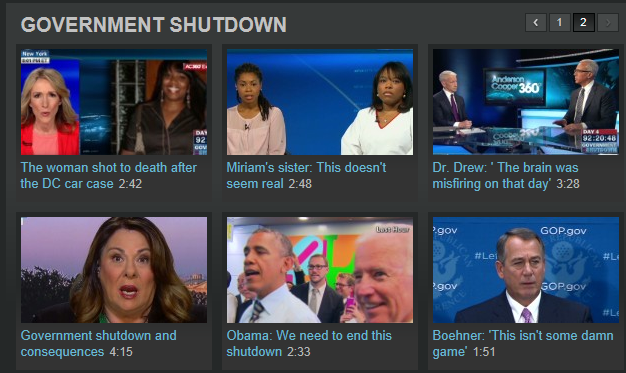 That's right. The Main Stream Media is trying its hardest to make the shutdown look as painful as possible. What's worse than the shutdown causing a woman to try to crash her car into the White House?

Of course that's not the reason she did that and there's no proof whatsoever that the shutdown had anything to do with her breakdown. But CNN sees political points that the Democrats might be able to gain, and they are quite happy to jump at the opportunity.

And its not just one video.  It's three.  Firmly leaving he impression that, without a doubt, the government shutting down caused a poor woman to do something drastic.

Main Stream Media "journalism" at its finest.
Posted by Aurelius