DOES THE QUESTION NOW ANSWER ITSELF?

On January 24, 2012, this writer posted a column entitled Is The Republican Party Worth Saving?   Please feel free to reread it. Unfortunately that question now seems to answer itself.

On June 27, 2013, at 04:11 PM, the “World’s Greatest Deliberative Body” voted, by 68 Yea to 32 No, to pass S. 744, the “Border Security, Economic Opportunity, and Immigration Modernization Act,” subtitled “A bill to provide for comprehensive immigration reform and for other purposes.” The bill’s title clearly informs the American people that the first and most important topic it deals with is “border security” (does it not?), and in the subtitle the clearly specific “and for other purposes” informs us of exactly what else it might contain.


It is good that the title is so informative, as the bill, weighing in at a svelte 1198 pages, guaranteed, once again, that virtually no one voting on it had actually read it. And the Republicans were pleased
that it was such a bipartisan effort. Today’s Republicans define a bill as “bipartisan” when, as here, zero (0) Democrats cross the aisle to vote against what Harry Reid wants, while fourteen (14)
Republicans cross the aisle to vote with Harry.


Lets talk about Marco Rubio, not because he is the only problem with the current Republican Party, but because in the last six or eight weeks he was the most horrible example of the problem. Rubio ran
for the Senate in 2010 vigorously seeking and accepting the support of the Tea Party. The internet is filled with video of Rubio at that time proclaiming how unthinkable it would be to pass an amnesty
bill, and promising that no immigration bill would get his vote without ironclad border security provisions before any talk of legalization. Then he was assigned to the Gang of Eight, and things
changed dramatically. It appears his job was to, smoothly and bursting with smiles, persuade every Republican in either House of  Congress that a “comprehensive” “immigration” “reform” bill was
absolutely essential right now!


In order to do that he relentlessly proclaimed that the existing bill was loaded with tough, airtight security measures, filled with “triggers”, etc., etc., and specifically that it will build 700 miles of double layer fencing, and will double the number of Border Patrol Agents, such that we will have
one Border Agent every thousand feet of the border, and that, as Lindsay Graham put it, we will have “militarized” the border. Sounds tough, no?


But now lets talk about some of what the bill actually says: 1) Fencing:  After page upon page of elaborate descriptions of fencing, accompanying infrastructure, and detailed locations for same, pp. 45-46 of the bill displays the following “Limitation” (which we have not heard mentioned by Marco Rubio): 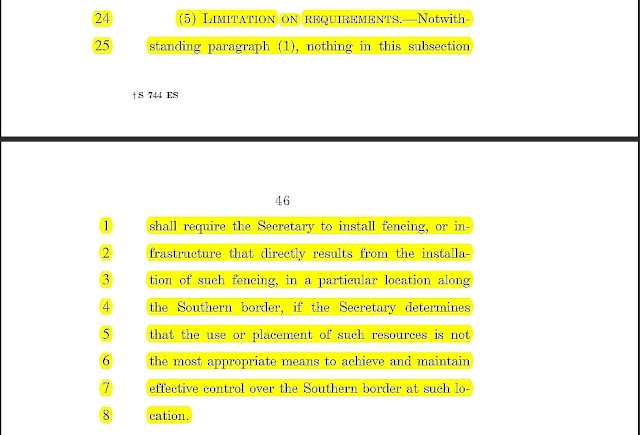 In other words, not one inch of new fencing will be built unless Janet Napolitano wants it to be. And, since she is not fond of fencing, and has already proclaimed the border to be as secure as it needs to be, don’t hold your breath waiting for fencing. 2) Double the number of Border Patrol Agents: We see the following in Sec. 1102 of the bill: 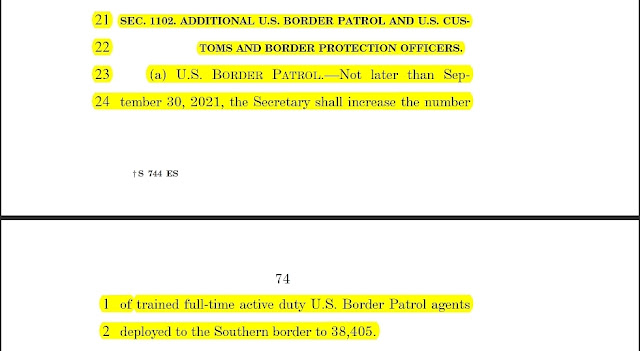 Please note two things: Napolitano doesn’t have to hire a single “additional” Border Patrol Agent for eight years; and, we have to scroll down to the “Construction” at Subsection (d) of SEC. 1102 to see that they don’t really have to all be ‘additional:”

Not only can she fudge on “additional” agents, but also, if we can assume agents are currently stationed on the Northern border because they are needed there, we will then be left shorthanded there.


The bill is also filled with other waivers and exceptions, and what “tough” measures are not expressly waivable can and will be ignored. Thus the long waiting periods, paying of fines and taxes, learning English, not having a criminal record, etc. are a joke. If the House passes any bill that says boo about immigration, it will end up in a Conference Committee, Harry Reid’s bill will end up on Barak Obama’s desk, and our Constitutional Republic will be no more. And Speaker of the House John Boehner, the only person at this moment with the power to prevent this awful bill from ending up on Barak Obama’s desk, “absolutely” trusts Barak Obama.

So, we knew all along what to expect from John McCain and Lindsay Gramnesty, but not, until now, from Marco Rubio. As he blabbered about airtight security, new fencing, new Border Agents, etc., did he not know about the “Limitations” and “Constructions” in the bill? If he did not and voted Yea anyway, he needs to be gone. And if he did know, he is a consummate liar and needs to be gone.


It is not at all difficult to believe that there are today tens of millions of patriotic American citizens who support and defend the Constitution as the Supreme Law of the land. Those people are today sick and tired of having to hold their noses every election cycle and vote for a “Republican” because the “Republican” candidate is the Progressive Democrat minus 10%, and that is better than any available alternative.


There was once a U.S. political party that had, in its recent past, put several Presidents into the White House. But it had begun to leave many of its members very dissatisfied. Those dissatisfied members left that party, formed a new one, and just four years later elected a President of their own. His name was Abraham Lincoln.