The same people who are calling George Zimmerman a vigilante and a racist are calling for vigilante justice of their own, as dozens of mentally disturbed people have urged the decapitation of Mr. Zimmerman.

The fact that these people clearly haven't actually followed the trial or learned any of the facts is immediately obvious. Also extremely obvious is that there is something very, very wrong with each of them.

Here is a small sample (obscenities obscured). "Zimmerman was Mexican:" 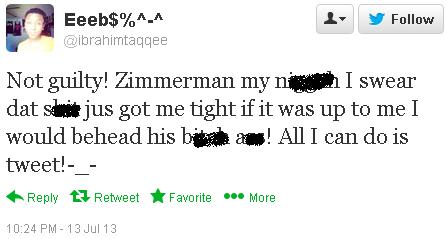 I want to fly down to Florida and decapitate George Zimmerman

They need to decapitate zimmerman nd put his head on show case.

Kill Zimmerman and anybody who supports him... And decapitate his lawyer.

Why is this case even open? George Zimmerman should have been decapitated for all I care