It hasn't taken long for liberals to start blaming former governor Sarah Palin for the terrorist attacks in Boston this afternoon.

Just hours after the horrific attack that has left at least two dead and possibly over 100 injured, the Left was more than happy to start slinging accusations.

User @polospal, who describes herself as an "Opinionated. Outspoken. Proud Democrat." tweeted: 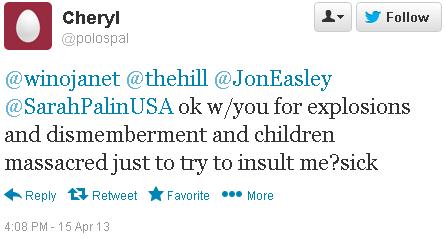 Yet another person suspected that Palin herself was a part of the attacks:

Liberals were also more than happy to blame conservatives as a whole for the tragedy in Boston:


I wonder if the Tea party had anything to do with the bombing in Boston? It's April 15th and federal taxes are due and it's Boston!
— Benton Pang, Ph.D. (@malamaikaaina) April 15, 2013

Today is #TaxDay & someone is bombing the city where the Boston Tea Party occurred. Coincidence?
— Scar (@goolander) April 15, 2013

Update: And how could I possibly forget? Many liberals are blaming President Bush for the bombings:


George Bush is back at it again in Boston this time

@lindalovelace_5 yea it was bush he blew up boston

Think its pretty pathetic people are blaming muslims for boston. If all terrorists are muslim, then what is george bush?