The Facebook group "I hate it when I wake up and Sarah Palin is still alive" has surpassed 3,300 "likes."

The founder explicitly says, "This is a page about venting dislike over Sarah Palin. This is no way advocates an assassination of Sarah Palin in any way, shape or form."

The fact that the group's name specifically wishes for her death is one thing that dispels that ludicrous statement. The second is its main picture, which clearly shows what the group advocates: 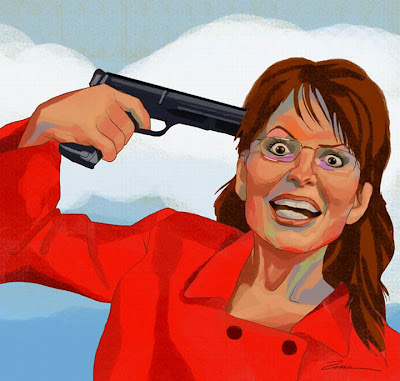 Among its posts, the group has angrily denounced Palin and Tea Party members. This post summarizes the majority of the members of the group:

Oddly, the group has also denounced President Obama, calling him "conservative" while posting this video:

Further, the group "liked" the Facebook page "I Hate it When I Wake Up and Michele Bachmann is Still Alive."

Pundit Press has reported on this hate group before. We had reported it at the time for its offensive use of images and calls for Sarah Palin's death. It's sad, but not surprising, to see that nothing has been done to end such foolishness.