New CIA Memo Reveals Admiral, Not Obama, In Charge of bin Laden Raid; No "Gutsy Call" Was Ever Made

With the one year anniversary of Osama bin Laden's death less than one week away, the Obama Administration has been spiking the football for all its worth. The narrative that we have been told since May 1, 2011 is that President Obama made the call to kill bin Laden, with one aide even going so far as to say President Obama's action was "one of the ... gutsiest calls of any president in recent memory."

The White House has run with this, milking bin Laden's death for everything its worth. It's even to the point where if go to "gutsycall.com," your browser will automatically direct you to barackobama.com.

Honestly, if the final decisions were up to President Obama, and no other President would have even considered carrying out the raid that killed bin Laden, the President should have the right to use bin Laden's death any way he sees fit. The problem is that the so-called "gutsy call" never existed. Putting aside the fact that any President with Mr. Obama's intelligence information would have made the same call, a new memo released yesterday that Mr. Obama did not make the "final" call, nor was it terribly gutsy. Instead, it shows that the President merely authorized the possibility for going to Abbottabad... and left everything else up to Admiral William McRaven.

You can see the memo below, which was written by then-CIA head Leon Panetta (you can click on the image for better quality): 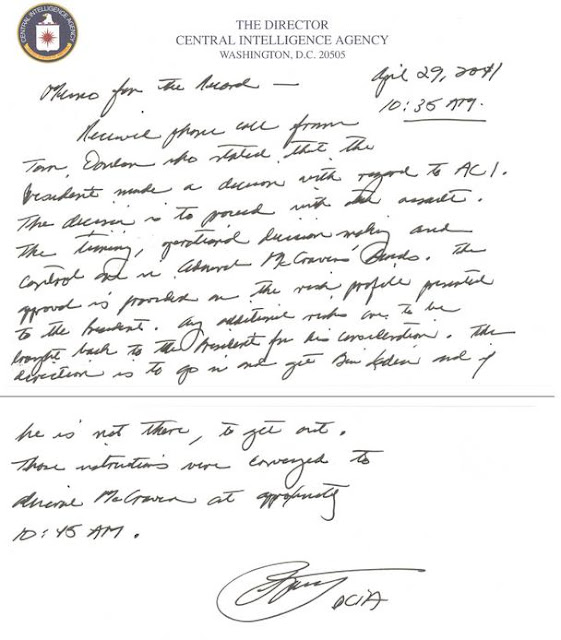 The memo reads (emphasis mine):


Received phone call from Tom Donilon who stated that the President made a decision with regard to AC1 [Abbottabad Compound 1]. The decision is to proceed with the assault.

The timing, operational decision making and control are in Admiral McRaven’s hands. The approval is provided on the risk profile presented to the President. Any additional risks are to be brought back to the President for his consideration. The direction is to go in and get bin Laden and if he is not there, to get out. Those instructions were conveyed to Admiral McRaven at approximately 10:45 am.

In other words, everything from when to go in, what to do, and how to do it were all up to Admiral McRaven. The President played practically no role in bin Laden's death other than being aware of it and allowing it... if bin Laden was indeed there. It wasn't gutsy in the least, but one of Mr. Obama's trademark non-committal commitments. If bin Laden wasn't there and everything went south, he could have easily pointed to the memo and said, "Gee, I told them to get out if he wasn't there!" Instead, bin Laden was there and the President took all the credit that he possibly could.

But there was no gutsy call. And there never was unless it was made by Admiral McRaven.