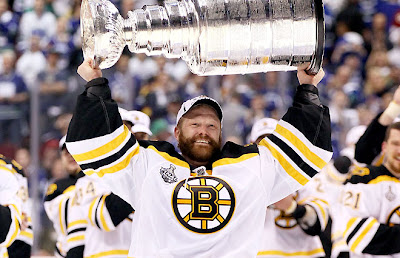 In a move that's being praised by some and ripped by others, Boston Bruins goalie Tim Thomas was a no-show at a White House ceremony hosted by President Obama to honor the 2010-2011 Stanley Cup champions.

On Monday, Thomas released the following statement via Facebook:

"I believe the Federal government has grown out of control, threatening the Rights, Liberties, and Property of the People.

This is being done at the Executive, Legislative, and Judicial level. This is in direct opposition to the Constitution and the Founding Fathers vision for the Federal government.

Because I believe this, today I exercised my right as a Free Citizen, and did not visit the White House. This was not about politics or party, as in my opinion both parties are responsible for the situation we are in as a country. This was about a choice I had to make as an INDIVIDUAL.

This is the only public statement I will be making on this topic. TT"

The native of Flint, MI spent the early 1990s playing for the NCAA's Vermont Catamounts in the Hockey East conference and was the 217th draft pick of the Quebec Nordiques (now the Colorado Avalanche) in the 1994 NHL Entry draft. Thomas bounced around the minors and Europe for the next several years. In 2002, Thomas landed with Boston's minor-league affiliate in Providence, RI and was called up by the parent club that year, earning his first NHL win after a 4-3 victory against the Edmonton Oilers in October 2002.

During the 2004-2005 NHL Lockout, Thomas returned to Europe where he played a season for Jokerit in Finland's SM-Liiga.

Thomas returned to Boston after the lockout, although he still served as backup to Andrew Raycroft and Hannu Toivonen. As Toivonen struggled and Raycroft was traded to the Maple Leafs [a trade that Boston continues to reap the benefits from to this day, I might add- Fenway], Thomas logged more and more time as a starter.

In 2009 and 2011, Thomas won the Vezina Trophy awarded to the league's best goaltender. During the 2010-11 Stanley Cup Finals, not only Thomas outdueled Vancouver goalkeeper Roberto Luongo and led the Bruins to their first Stanley Cup in 39 years thanks to his clutch play in net in Game 7, but he also was awarded the Conn Smythe trophy- the award given to the most valuable player in the NHL Playoffs

Thomas is by no means the first staunchly conservative athlete to play for a championship team in Boston. Former Boston College Tight End and Massachusetts Native Mark Chmura declined to meet with President Clinton as a member of the Green Bay Packers Super Bowl Champions in 1997 at the height of the Monica Lewinski scandal [only to be enmeshed in a sex scandal of his own a few years later- Fenway]. In 2004, Red Sox starting pitcher Curt Schilling came out in support of George W. Bush just days after the team won their first World Series since 1918; Red Sox management, however, were staunch supporters of Massachusetts Senator and Democrat Nominee John Kerry.

As mentioned earlier, Thomas is a native of Flint, MI- the same hometown as schlockumentary director Michael Moore. Although the portly propagandist has already weighed in, Thomas likely knows a thing or two about Democrat-run cities becoming empty husks of their former selves.

Prior to Thomas skipping Monday's White House events, little was made about Thomas' political leanings. In 2010, Thomas reportedly donated to Tea Party-backed candidates and conservative PACs during the midterms while his ornately decorated mask features a version of the Gadsden Flag- an unofficial symbol of the Tea Party.

I also took the time to point out Thomas' career track because his journey to the Stanley Cup wasn't a rapid, meteoric rise to the top. At the age of 37, Thomas got where he is today because of hard work, perseverance and skill and even before there was a Stanley Cup parade in Beantown, the Bruins and the NHL decided to reward him handsomely for it.

Thomas' success and hard work in getting where he is now is something progressives have clearly held in such contempt and disdain. Not surprisingly the netminder has been on the receiving end of cheap shots all day on social media.

Other columnists, even those supportive of the Obama Administration, point out that Thomas was well within his rights to skip the White House luncheon.

It's also worth pointing out that Thomas is only one of two Americans on the team- aside from Joe Corvo (a fellow American, but not on the Championship team last year) the captain Zdeno Chara (who's Slovakian) and Tukka Rask (who's Finnish), the overwhelming majority of players on the current Bruins roster are Canadian.

Players from Championship teams visiting the White House is nothing new. The Democrats- sore that their god with the 44% approval rating was snubbed- are now telling Tim Thomas to stick to hockey.

So what do you think? Was Thomas out of line or being selfish? Or as one of the few Americans on this team (and he and his family having to live with the end results of Obama's policies for generations to come) does that supersede etiquette and protocol?