You know all of those lies from "protesters" on Wall Street?  'Occupy Wall Street' whines for free money and, at times, cannibalism.  They scream that they are the "99%," that they are impoverished and deserve more.  In the meantime, of course, they update their Twitter statuses on their iPhones and laptops.

Now, Pundit Press has discovered that those protesting are not simply doing it because they have their facts mixed up.  Instead, many are getting up to $650 a week protesting on Wall Street against... greed.

Go over to Craigslist and you will find an ad taken out by the Working Families Party.  The advertisement declares that "wallstreet (sic)" must be held "accountable."  Applicants must be "outgoing, articulate dedicated, determined (sic)."
And, no, you don't need to worry about actually having a job or actually contributing to society.  Instead, the WFP will pay "$350-$650 A Week."  In other words, protesters saying that they are the "99%" and that they are impoverished could actually be making the equivalent of a $34,000-a-year job by simply holding up a sign for a couple of hours.

If you want some of the details, here are the first couple of paragraphs, exactly as they appear in the ad:


The Working Families Party (WFP) (www.workingfamiliesparty.org) is New York's most energetic, independent and progressive political party. Formed in 1998 by a grassroots coalition of community organizations, neighborhood activists, and labor unions, we came together to build a society that works for all of us, not just Wall Street CEOs and the well-connected. WFP is independent from corporate and government funding and in-addition we are community based; community funded and equally uninfluenced by both major parties. Our agenda focuses on economic and social justice, corporate accountability, job creation, environmental protection, and investment in education and healthcare.

For the past twelve years the WFP has been at the fore front of progressive politics,

Leading the fight and helping to frame the debate. The WFP has a proud record of fighting for issues that matter and has been instrumental in implementing key pieces of legislation such as Raising New York's Minimum Wage, Enacting Living Wage Laws, Creating Thousands of Jobs In the Green Economy, Passing Healthcare Reforms on the Local Level, Fighting for Affordable Housing, Keeping Tuition Costs Low, A Progressive Tax Code, Reliable/Cost Effective Public Transit System, Public Financing Of Elections and Corporate Accountability . In addition, we have an unapologetic stance on supporting and pushing good candidates to enact progressive legislation

The WFP is seeking immediate hires.

The headline of the ad screams in all capital letters: "FIGHT TO HOLD WALLSTREET ACCOUNTABLE NOW! MAKE A DIFFERNENCE GET PAID!" If you are interested in calling for the end of capitalism, while making money off of capitalism, feel free to contact this email, which is contained in the ad: job-fvgsu-2618821815@craigslist.org.

Even more, this ad predates the "big" protests, which means that much of the "support" is fake and/or bought:

Occupy Wall Street looks to be getting faker and faker.

Update- And in case you simply cannot believe that the Workers Families Party would take out an ad on Craigslist, you are exceedingly wrong.  If you follow the link provided in this advertisement and fill out the job form, you have the option of saying where you heard about the opportunity.  Take a look what one of the options is: 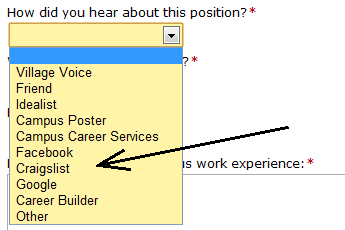