After seven long months of hard fighting by Rebels on the ground and NATO in the air, with the liberation of Libya from the dictatorship of a "mad dog", the ultimate victory has been accomplished in Libya this morning: Muammar Qaddafi was killed during the fall of his hometown Sirte. 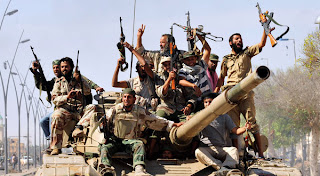 As someone who has closely followed this military uprising since March, I am left without words to describe the emotions of victory welling up inside of me. To think that the Rebels were at the point of massacre before NATO intervened in Benghazi and destroyed Qaddafi's air force, and now they have won their country back is amazing.

Obviously, the Rebels have lots of work to do when it comes to instituting a new government - one I hope is reflective of liberal, pluralistic values and not dogmatic, islamic morals - but they have aided the world in one way that we should always be thankful for: ending the four decade reign of Qaddafi, who was responsible for the deaths of hundreds of Americans and Britons.
Posted by Editor