UPDATE: This article was written two months ago.  Gaddafi IS finally dead.

Like "pictures" of Osama bin Laden's dead body, photoshoppers have been busy making fake images of a dead Muammar Gaddafi.  The most prevalent one is this one, supposedly showing him in a pool of blood: 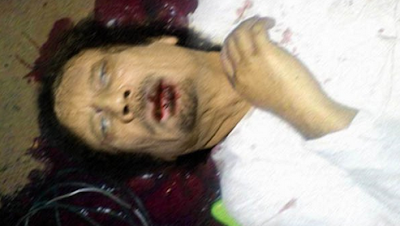 But this picture is an obvious fake to anyone who has paid careful attention to the news in the last few months.  Look at "Gaddafi's" left shoulder.  Anyone who remembers pictures that came out after bin Laden died of dead men in his compound remember the "water gun" photo, which appeared to show a water gun behind a dead, bloody man lying on the floor.

The gun was bright green, the blood was dark red, and the man wore a white shirt and had dark black hair.  He had one hand across his chest Knowing this, I looked up the picture (in an article that I did some months ago) and this is what I found (warning, graphic): 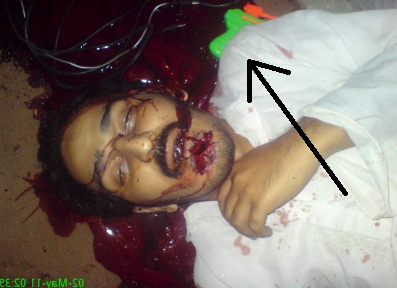 Look familiar?  The photoshopper simply flipped the image and put Gaddafi's face on it.  So that people wouldn't recognize the water gun off the bat, he or she simply moved it slightly so that the orange on the gun wasn't visible.